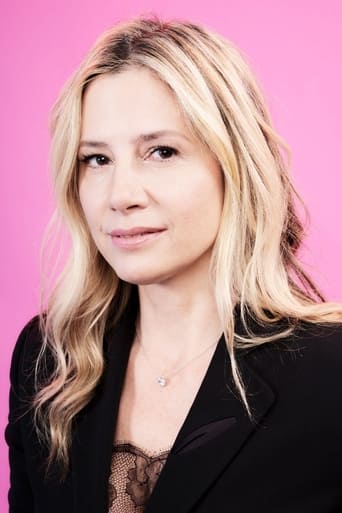 Mira Katherine Sorvino (born on September 28, 1967) is an American actress. Her father is veteran actor Paul Sorvino and her mother is former actress Lorraine Davis. Her role in popular culture is forever cemented by her role as charmingly silly California girl Romy White in Romy and Michele's High School Reunion (1997). She attended Harvard, majoring in Chinese, graduating magna cum laude in 1989, largely on the strength of her thesis, a Hoopes Prize-winning thesis on racial conflict in China, written and researched during the year spent in Beijing, which helped her fluency in Mandarin Chinese. Her first major screen appearance was in the teen series Swans Crossing, where she appeared in six episodes. When the 1993 film Amongst Friends entered preproduction, she was hired as third assistant director, then promoted to casting director, then to assistant producer, and finally offered a lead role. The positive reviews she received led to more acting opportunities. After small roles in Robert Redford's Quiz Show and Whit Stillman's Barcelona, she was cast in Woody Allen's Mighty Aphrodite (1995). Her portrayal of a happy-go-lucky prostitute made her a star, winning her an Academy Award and Golden Globe for Best Supporting Actress. Her next notable credits include Romy and Michele's High School Reunion with Lisa Kudrow, At First Sight with Val Kilmer, and Spike Lee's Summer of Sam. She portrayed Marilyn Monroe for the 1996 HBO film Norma Jean & Marilyn, for which she was nominated for a Golden Globe; and had the lead role in Guillermo del Toro's horror film Mimic. In 1995, she portrayed Conchita Closson in the BBC miniseries The Buccaneers, based on Edith Wharton's last novel. She starred as Daisy Buchanan in the 2000 television film The Great Gatsby. In 2002, Sorvino appeared as the lead in The Triumph of Love, an adaptation of the 1732 Marivaux play. That same year, she also starred in Wise Girls. In 2006, she received a Golden Globe nomination for her role as an Immigration and Customs Enforcement agent in the Lifetime film Human Trafficking. She then had a supporting role in the drama Reservation Road (2007), starred in Attack on Leningrad (2009), Multiple Sarcasms (2010), and Nancy Savoca's Union Square (2012). In the same year, she played the mother of the lead in the film adaptation of Wendy Mass's popular children's book Jeremy Fink and the Meaning of Life. In 2014, she reappeared as Head Detective Betsy Brannigan on the final season of Psych, and on the fourth season of Falling Skies as John Pope's love interest, Sara. She also joined the cast of the television series Intruders, playing the role of Amy Whelan. In 2019, Sorvino was cast in the Netflix miniseries Hollywood as an actor whose career stalled out after a relationship with a studio head.