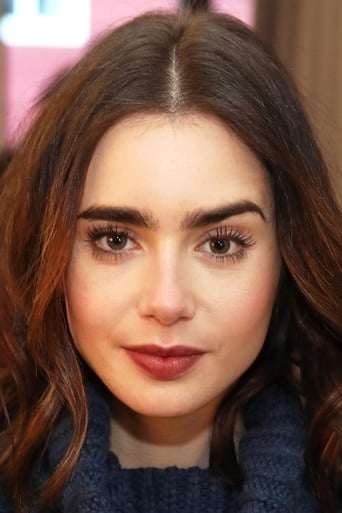 Lily Jane Collins is an English-American actress, producer, model, and author. She is the daughter of English musician Phil Collins and his second wife, Jill Tavelman. Collins began performing on screen at the age of two in the BBC sitcom Growing Pains. In the late 2000s, Collins began acting and modelling more regularly, and she had a career breakthrough with her performance in the sports-drama film The Blind Side. She went on to appear in leading roles across feature films such as the sci-fi action-horror Priest (2011), the psychological action-thriller Abduction (2011), the fantasy Mirror Mirror (2012), the urban fantasy The Mortal Instruments: City of Bones (2013), and the independent romantic comedies Stuck in Love (2012), The English Teacher (2013), and Love, Rosie (2014). Collins was critically acclaimed for her roles as Marla Mabrey in the comedy Rules Don't Apply (2016), which earned her a nomination for the Golden Globe Award for Best Actress – Motion Picture Musical or Comedy, and for her portrayal of a young adult with anorexia in the controversial Netflix drama To the Bone (2017). She has appeared in thrillers including The Dig (2017) and Inheritance (2020). She has also achieved recognition for her work in biographical films: she starred as Liz Kendall in the Netflix drama Extremely Wicked, Shockingly Evil and Vile (2019), as J.R.R. Tolkien's wife Edith in Tolkien (2019), and as Rita Alexander in Mank (2020). Collins played Fantine in the BBC miniseries adaptation of Les Misérables (2018–2019). In 2020, she landed the lead role of Emily Cooper in the Netflix series Emily in Paris, for which she received a nomination for the Golden Globe Award for Best Actress – Television Series Musical or Comedy. She made her writing debut with Unfiltered: No Shame, No Regrets, Just Me (2017) in which she discussed her struggles with mental health, including an eating disorder she suffered from as a teenager.