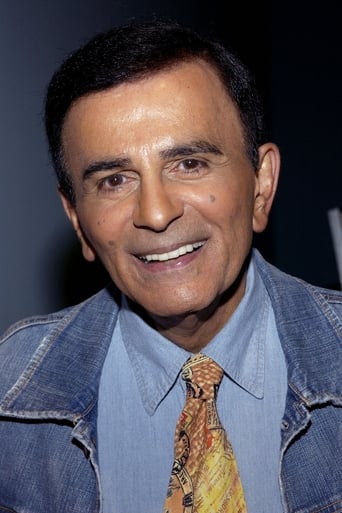 Kemal Amin "Casey" Kasem (April 27, 1932 – June 15, 2014) was an American radio personality and voice actor who is best known for voicing Shaggy in the popular Saturday morning cartoon franchise Scooby-Doo and for being the host of the nationally syndicated Top 40 countdown show, American Top 40. Kasem, along with Don Bustany and Ron Jacobs, founded the popular American Top 40 franchise in 1970, hosting it from 1970 to 1988 and then from 1998 to 2004. Between 1989 and 1998, he was the host of Casey's Top 40, Casey's Hot 20, and Casey's Countdown. He is currently heard on Premiere Radio Networks' weekly syndicated radio programs based on the American Top 40 franchise: Casey Kasem's American Top 40: The '70s and Casey Kasem's American Top 40: The '80s are replays of AT40 shows from the respective decades. He also hosted American Top 20 and American Top 10. Kasem retired from AT20 and AT10 on July 4, 2009 and both shows ended on that day. In addition to his radio shows, Kasem has provided the voice of many commercials, has done many voices for Sesame Street, was the voice of NBC, helps out with the annual Jerry Lewis telethon, and most notably, provided the cartoon voice of Robin in Super Friends, Mark on Battle of the Planets, and a number of characters for the Transformers cartoon series of the 1980s. In 2008, he was the voice of "Out of Sight Retro Night" which airs on WGN America, but recently was replaced by rival Rick Dees. After 40 years, Casey retired from his role of voicing Shaggy from Scooby Doo in 2009, instead voicing Shaggy's father in the 2010 TV series, Scooby-Doo! Mystery Incorporated. Casey's signature sign-off is "Keep your feet on the ground and keep reaching for the stars." Description above from the Wikipedia article Casey Kasem, licensed under CC-BY-SA, full list of contributors on Wikipedia .