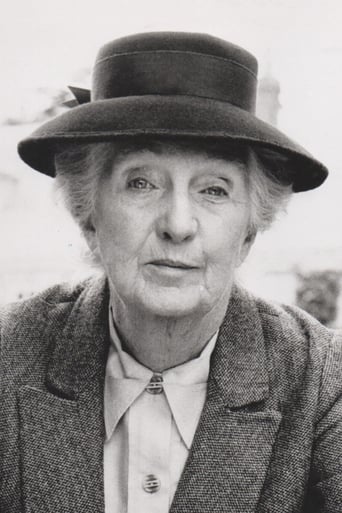 Joan Bogle Hickson, OBE (5 August 1906 – 17 October 1998) was an English actress of theatre, film and television. She was known for her role as Agatha Christie's Miss Marple in the television series Miss Marple. As well as portraying Miss Marple on television, Hickson also narrated a number of Miss Marple stories on audio books. Born in Kingsthorpe, Northampton, Hickson was a daughter of Edith Mary (née Bogle) and Alfred Harold Hickson, a shoe manufacturer. Boarding at Oldfield School at Swanage in Dorset she went on to train at RADA in London. Making her stage debut in 1927, she worked for several years throughout the United Kingdom and achieved success playing comedic, often eccentric characters in London's West End, including the role of the cockney maid Ida in the original production of See How They Run, at the Q Theatre in 1944, and then at the Comedy Theatre in January 1945. She made her first film appearance in 1934. The numerous supporting roles of her career included several Carry On films including Sister in Carry On Nurse and Mrs May in Carry On Constable. From Wikipedia, the free encyclopedia