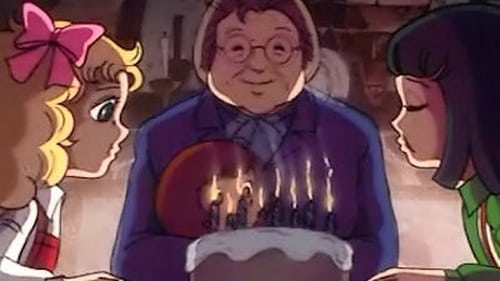 At Pony's Home, an old church and orphanage run by Miss Pony and Sister Mary, young Tom discovers that something is amiss outside. When Miss Pony and Sister Mary go outside to investigate, they find two abandoned babies, Annie and Candy White. Over the next decade, the girls become best friends who try to sabotage visits from possible future parents in order not to be adopted. Meanwhile Candy and Tom often get into verbal and physical fights. While the dark-haired Annie grows up into a docile girl, the blond-haired Candy has become an incorrigible tomboy who climbs in trees, loves mischief and has an excellent lasso throwing skill. The nuns have to scold Candy regularly for her recklessness. When the wealthy farmer Steve adopts Tom, the two girls are reminded of the danger of being separated if either one is adopted. Gradually, Candy also realizes that she will miss Tom. On his emotional farewell day, Miss Pony and Sister Mary reveal to Annie and Candy that it was Tom who had first noticed them all those many years ago. This prompts the girls to see Tom off from atop a cliff, and the episode ends with Anny confessing to Candy in tears that she would like to have parents of her own, but not at the cost of being separated from Candy.