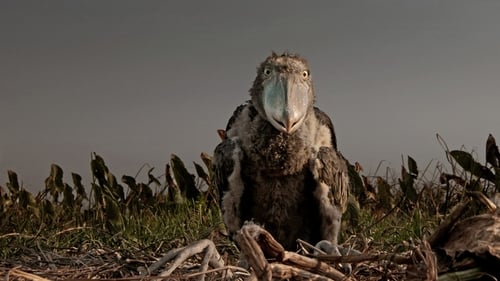 East Africa is the subject of the second programme, from the glaciated peaks of the Rwenzori Mountains to the savannahs and caustic soda lakes of the Great Rift Valley. The filmmakers focus on the life and death decisions animals must make in this ever-changing region. On the savannah, agama lizards play a game of dare as they approach a sleeping pride of lions to catch flying insects. A shoebill chick is filmed attacking its weaker sibling, forcing the parents to abandon it. On the plains of Amboseli, the worst drought for 50 years claims the life of an elephant calf, one of hundreds which perish from starvation. Their resilience and adaptability is highlighted by the returning rains, which bring together large herds to socialize. In Eye to Eye, cameraman Mark Deeble discusses the ethics of filming the dying elephant calf.