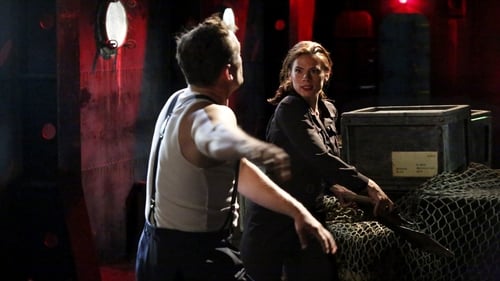 Dooley and Krzeminski investigate Demidov's hotel room, and discover a typewriter. Thompson and Sousa take Jarvis in for interrogation, and the former threatens him with revealing an old treason charge to the immigration office. Carter, feigning ignorance, botches the interrogation to get Jarvis out, and receives a stern reprimand from Dooley. Carter and Jarvis then follow the sewer system below Stark's vault, through which Brannis took the stolen technology, to the docks, where they find the weapons on board The Heartbreak (a ship bearing Brannis' symbol). Jarvis anonymously gives the SSR their location, while Carter fights off a guard who had been working with Brannis. Carter and Jarvis are forced to leave him behind as the SSR arrives. While being transported back to SSR headquarters by Krzeminski, the guard is about to identify Carter as the woman interfering with the Stark investigation, when an unidentified assassin kills them both.