1x4 - Life in the Undergrowth 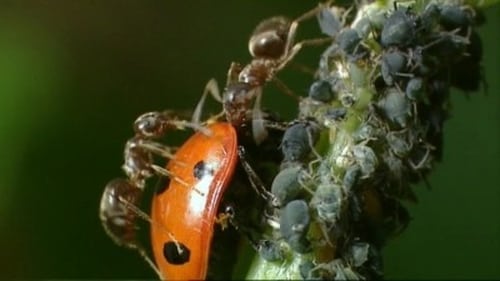 The world of invertebrates exists in a web of relationships with plants and other animals. Unique footage of the world's smallest insect (a fairy wasp only quarter of a millimetre long) shows it flying underwater to find the eggs of water beetles in which to lay its own brood. Some ants 'farm' the trees that give them shelter, creating areas known as 'Devil's gardens'. To make sure these grow without competition, they kill off other seedlings in the surrounding vegetation. The blister beetle's larvae huddle together on the end of a piece of grass and mimic a female bee. When a male bee tries to mate with the 'female', the larvae grab on to his belly. Confused, he flies away and searches for a real female. When he eventually finds her and mates with her, the beetle larvae hurriedly swap from his front on to her back, and hence get carried back to her nest where they eat her pollen supplies.