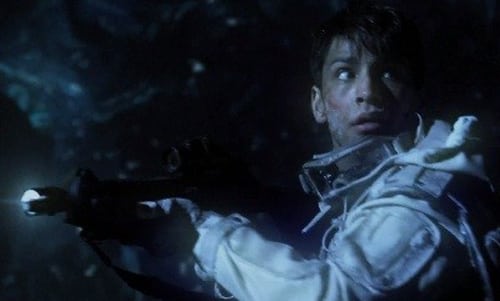 Adama, Coker and Dr. Kelly trek abandon the Weasel and trek through Djerba's harsh wind and snow, following a signal with Dr. Kelly's communicator. They track the signal to a huge cave, where they discover their escort unit dead from mysterious non-artillery wounds. Suddenly the cave floor collapses and plunges them into a dark underground chamber. Strange noises surround them and a large snake-like creature lunges out and bites Coker. As Coker struggles to contain the monster, a man rappels into the chamber and kills the snake. He introduces himself as Toth, the only surviving escort. He explains that the snakes, which killed his unit, were created by Cylons doing half animal/half machine experiments. Toth has been alone in the cave for some time and is slightly mentally unstable, prone to unpredictable aggressive outbursts. Nevertheless, he has scouted a route to Dr. Kelly's objective. They leave the cave and stop at a cliff overlooking a seemingly abandoned resort compound.