Kingdom Of The Elves 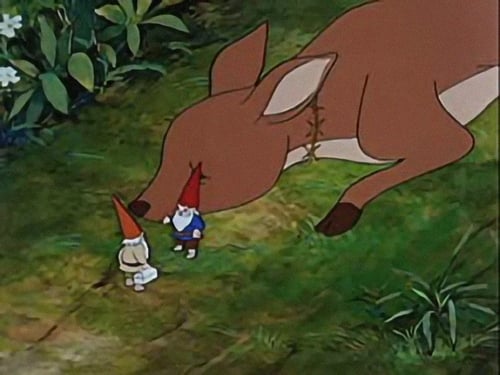 The episode starts out with David telling how gnomes make pottery and candles. When he goes outside, another gnome tells him that a little deer has a barbed wire around his neck and needs help. David calls for Swift, but Swift doesn't come. He finds the fox a few feet away, but he is sick from eating poisoned food, a trap set by the trolls. David gives Swift some medicine and makes him better. Next David goes and cuts the wire from the deer's neck. On the way back, David decides to go see Gustav, the king of the elves to help get revenge on the trolls. Gustav sends some of his little elf messengers to the lake and Swift lures the trolls there, by lying down and pretending to be dead. Once the trolls show up, the elves tease them, drag them through the water, and tie their tails together. David reminds the elves not to hurt the trolls, just tease them.