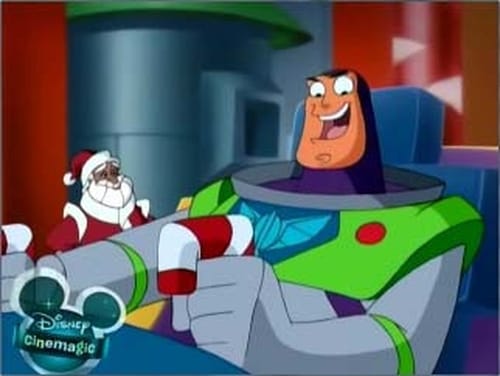 ""Holiday Time"" is derived from ""The Grinch who Stole Christmas"" with elements from ""The Matrix"" (including slow-motion projectile dodging.) A fun episode with some of the best animation in the series. Evil Emperor Zurg steals the ""Chrono-Disruptor"" from Santa (yes, the REAL Santa). This is a device that allows the Jolly Old Elf to stop time and deliver all those gifts in one night. Zurg then goes on a terror spree. He essentially steals Christmas right out from under the Space Ranger's noses, who are helpless to mount a defense. Meanwhile Santa tries to convince Team Lightyear that he is the genuine article in order to get their help. He finally gets Buzz to believe by relating a tale from Buzz's childhood, something no one should know. We get to see Buzz as a kid in a flashback to when he singed his cat Fluffy's tail with a laser. (yes, he's wearing the hood). This is also the second episode we hear about that rocket toy he wanted but never got as a kid. Santa takes Buzz to his homewo