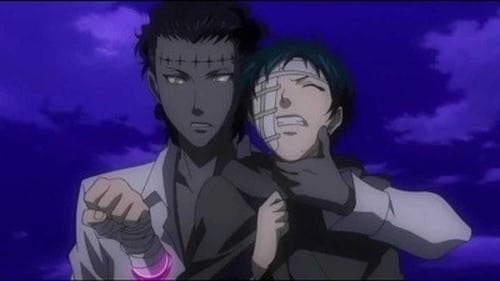 The battle between the Exorcists and the Noah continues. While Lavi fights Tyki, the Earl combines the Level 3 Akumas into one giant Akuma that attacks the Exorcists. Meanwhile, Lavi attacks Tyki with a new move (a combination of the Fire and Heaven Seals). The Exorcists attack the giant Akuma, but their attacks have little effect. The giant Akuma uses its Evil Star Gita attack and destroys much of the battlefield. Chomesuke sacrifices herself to enable Lavi, Krory, and Bookman to attack the giant Akuma's head (its weak point). Although they succeed in knocking it down, the Akuma manages to get back up again and severely injures them. Meanwhile, Allen enters the Ark and is surprised to find that it is a lovely place filled with white buildings, just like any other country. When he expresses his concern for his friends, Komui cheers him up by telling him to think happy thoughts. Kanda, Marie, and General Tiedoll arrive in Edo, overlooking the scene of the battle between the other Exorcists and the Akuma.