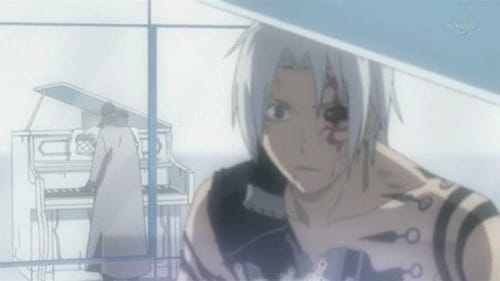 The Earl and General Cross Marian share a brief conversation, and when the Earl mentions all of the Exorcists who "disappeared," Allen becomes enraged and attempts to fight the Earl, despite the fact that he is quite seriously wounded. Upon seeing Allen's new innocence, the Earl comments that it is just like his own sword, and after trading a few blows with Allen, decides to take the unconscious Tyki and escape the crumbling Ark. As Allen attempts to follow the Earl, General Cross uses the Carte Garde ability of his innocence Grave of Maria, and orders Allen to stop fighting the Earl from his hatred. The General then takes both Allen and Lenalee to the Akuma Egg, and orders Allen to control the Ark, and sends him and Timcampy into the "secret room" of the 14th Noah, where Allen faces a dark apparition in the mirror who calls Timcampy "My Timcampy." The black Ark of the Earl is revealed, and it seems that all is lost as the Original Ark disappears; but when Allen begins to play on the white piano, using a mysterious set of symbols projected by Timcampy as the music, the Ark begins to join back together again.