Let Us Entertain You 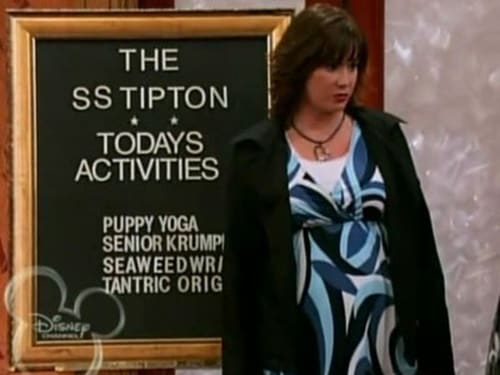 Zack and Cody offer to bring their mother on a week-long vacation to the S.S. Tipton, staying in the King Neptune Suite, which overjoys Carey. However, they neglect to tell her that the only way they could afford the vacation is for Carey to be the cruise ship's singer, although Carey soon finds this out herself. Since Carey does not want to work during her vacation, she offers to pay for her room herself, although the only room she can afford is the "Sardine Suite" (storage room). Annoyed by the few privileges she has from this, she finally agrees to sing, although she falls asleep in the sun and gets sunburn, no longer able to perform. Zack and Cody then perform in her place and do a good job, and get an encore. Meanwhile at the Boston Tipton, London is hosting a 24-hour telethon during her "Yay Me!" broadcast, while raising money for the homeless/hungry through phone pledges. However, a blizzard occurs, which prevents any of London's guests for her broadcast to get to the hotel (since the roads have all been closed). Therefore, they are forced to improvise, which include Mr. Moseby jumping through a hoop like a dog, Maddie and London performing a ventriloquist act, and London spinning plates. However, they soon realize that their internet connection has been lost for over twenty three hours and that all their performances had been for nothing. Instead, they decide to give the left-over food from the Tipton to the food shelter once or twice a week.