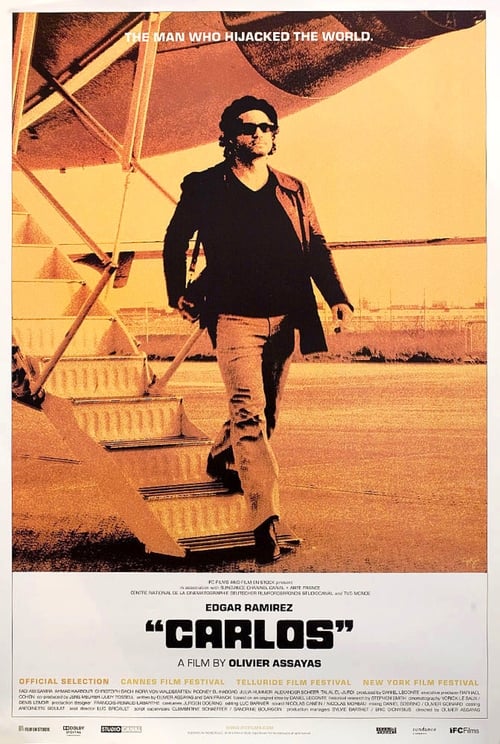 Carlos is a French-German television and cinema biographical film from 2010, about the life of the 1970s international terrorist Carlos the Jackal, from his first series of attacks in 1973 until his arrest in 1994. It premiered as a three-part TV mini-series on French pay channel Canal+, with the three parts airing on 19 May, May 26 and June 2, 2010. On the same day it premiered on Canal+, the full 5½ hour version was also shown out of competition at the 2010 Cannes Film Festival. Produced by Daniel Leconte of French production company Film En Stock and Jens Meuer of German production company Egoli Tossell Film, in association with Canal+ and French Arte, it was directed by Olivier Assayas from a screenplay by Leconte, Assayas and Dan Franck, and stars Édgar Ramírez as Carlos. The film exists both as a three-part mini-series and a feature film of various lengths between 338 and 319 minutes, but also in several abridged versions, from 187 minutes down to 166 minutes. Classified as a theatrical film as well as a TV film/TV mini-series, Carlos has been awarded both theatrical awards and TV awards; among them the 2010 Golden Globe award for the 'Best Miniseries or Motion Picture Made for Television', the 2010 Los Angeles Film Critics Association Award for Best Foreign Language Film and Best Director, the National Society of Film Critics 2010 award for Best Director, the New York Film Critics Circle 2010 award for Best Foreign Language Film, the 2010 European Film Award for Best Editor, the 2010 Critics Award for Best Film at the São Paulo International Film Festival, and Édgar Ramírez won the 2010 César Award for Most Promising Actor.