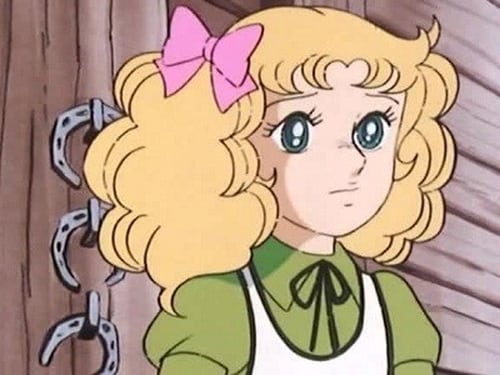 Mrs. Leagan banishes Candy to sleep in the barn from now on, which Candy does not mind: though hard work, the horses and she will appreciate each other; plus she gets to sleep with Klint. When Candy encounters Anthony in their garden on business and helps him carry his heavy load, she faints, weak from her daily hard labor. Anthony notices her dirty and bruised hands, but she tries to keep the truth secret to him. Meanwhile, Stear almost hits little orphan John in a car accident and drops him off at the Leagans. The orphan wants to see Candy's new life with his own two eyes as well as celebrate the end of his bed watering. Dorothy helps to keep up appearances by showing John into Eliza's room as if it is Candy's. Eliza returns home sooner than expected, however, and she is none too keen on interlopers. Surprisingly, Mrs. Leagan wants Candy to continue the charade: Sister Mary came to visit Candy (in search of John). After Klint leads John into the stable and reveals Candy's secret, Candy makes him promise to keep her secret for her. But Sister Mary does not need John to know the truth: Candy's hands reveal all. In a private conversation with Candy the next day, Sister Mary confesses she wanted to take Candy back home with her originally, but after meeting the Cornwell brothers who took John aside, she thinks Candy has all she needs to be truly happy: friends. They say goodbye and part. Candy realizes Anthony must have made the same conclusions once he had seen her hands, and she fears he will avoid her from now on. But Anthony enters the barn, apologizing for not being a gentleman the day before and letting her carry his load when he knows she works so hard already. He presents her a rose, promising that he will give her a more beautiful one on her next birthday.