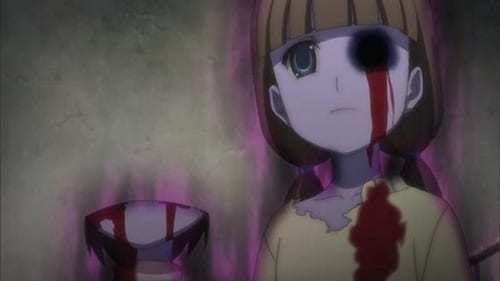 The Kisaragi students learn that Heavenly Host is the site of a murder incident where school teacher Yoshikazu Yanagihori allegedly cut out the tongues of four children. Ayumi Shinozaki and Yoshiki Kishinuma are attacked by the ghost of one of the victims, but are rescued by the ghost of Naho Saenoki, a famed blogger who posted the Sachiko Ever After ritual online. They later find a bag of the children's severed tongues, which can be used to appease their spirits. Meanwhile, two of the other child victims kill Mayu by smashing her body against a wall, while her teacher Yui Shishido is struck in the head by the undead Yoshikazu. After the girl in red separates siblings Satoshi and Yuka Mochida, Yuka is pursued by Sakutaro Morishige, whose discovery of Mayu's remains has driven him insane. Yuka is rescued by Yuuya Kizami, a student from Byakudan Senior High School, who proves himself to be insane as well when he stabs Sakutaro to death and declares Yuka to be his own little sister.