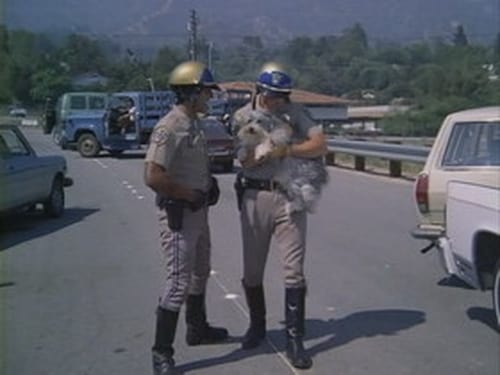 Ponch and Jon are chasing a dog which causes an accident. They bring it to Central and hide it in a truck. Some guys do sabotage on Jon's motorbike, but they wanted Ponch's. Jon and Ponch stop a motorbike driver who has frozen up. After they stop him he wanders off muttering how he never wants to ride it again. Jon and Ponch chase down a speeding car with a heart attack victim. They help to save him before an ambulance arrives. One of the boys who did sabotage to Jon's bike tells Getrear what they have done. The Sarge tries to warn Ponch , but Ponch realizes that they have done it to Jons motorbike. Jon falls off his bike but lukyliy he 's not even bruised. Finally the dog's owner shows up at CHP Central looking for his dog. Ponch gets him out of a truck and the dog proceeds to relieve itself on Sarge's motorbike. This synopsis was given from CHiPs Online