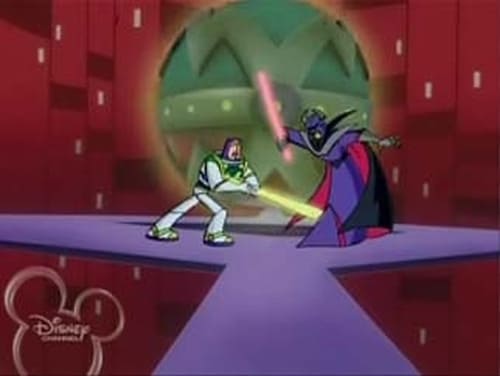 Zurg's latest creation, Project X, a Lurker-like blanket thing that wraps over one and takes control of one, is sent to destroy Buzz Lightyear, etc... The shape stealer first takes over Buzz's next door neighbor, Mr. Hayman, and tries to kill Buzz with hedge clippers, then when Buzz has to fly off to TradeWorld to deal with Lardak Lurdak (a petty criminal), it takes over Ed the Courier and flies off to catch up with him. Once on TradeWorld, the shape stealer takes over a Vulturan, then some piggy-looking bystander, and then a bus driver, all of whom attempt to stab, shoot, or run over Buzz. When the bus crashes, the shape stealer is nowhere to be seen. When Team Lightyear return to Star Command, the shape stealer proves to've been just biding its time. It takes over a LGM (who tries to shoot Buzz), then Booster (who tries to beat up Buzz), and then it just takes over Buzz himself...but without showing any signs of having done so. When Nebula locks Buzz into Star Command's Combat