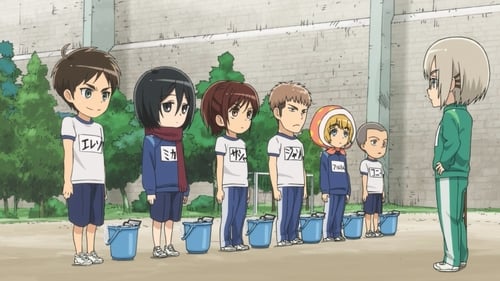 Eren and the others are forced to join the Wall Cleanup Club since the Scout Regiment Club is an unapproved club. There, they are tasked with cleaning windows by Rico. Impressed by their work, she agrees to teach them how to use the club's secret equipment, the omni-directional mobility gear. Eren, however, fails the test because of an equipment failure. Hannes, the club's advisor, arrives to show him how it is done, but crashes into the Wall due to being drunk. This allows Rico to save face by blaming the broken equipment on Hannes. Two Titans then appear, and the club watches in horror as they vandalize the Wall. Rico explains that this is why the Wall Cleanup Club was originally founded. Outraged, Eren attacks the Titans, only to end up covered in paint.