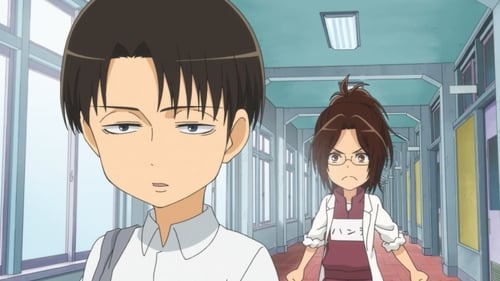 Sasha and Conny both fail their tests and ask Armin for help. Conny promptly forgets about the study session, but Armin manages to help Sasha with math by using food metaphors. Meanwhile, Eren, Mikasa, and Jean are forced to listen to Oruo brag about his test scores. Hange then arrives and tries to extort money out of them for lunch. When they ask her why she cannot afford her own, she shows them the two Titans she is keeping captive, forcing her to use up the biology club's budget as well as her allowance to feed them. Levi takes pity on her and gives her a bag of dog food to feed the Titans, which she then eats herself. Later, when the time comes around for the makeup test, Sasha fails due to fantasizing about food, and Conny fails after he forgets to show up for it; causing them both to be forced to take remedial classes.