Focus Your Tentacles On Her! / Feeling Inkuisitive? / A Squiddle Work Never Killed Anyone. 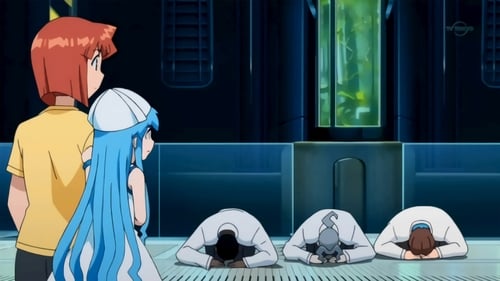 Concerned about any evil plans Ika may have, Nagisa decides to sleep over at the Aizawas to keep watch on her. Nagisa pretends to not be scared of Ika, which upsets her. Eiko tries to convince Ika to just be friends with Nagisa, but Nagisa’s fear rises up again. As Ika decides to play as being Queen, Cindy manages to trick her into agreeing to come to her secret laboratory, where she meets some her strange co-workers; Harris, Clark and Martin. Later, the girls run into the Southern Winds owner’s daughter, and offer her a trial run working at the Lemon. As she attracts more sales, Eiko lets the owner have Ika for the Southern Winds, where she proves to be a worthwhile entertainer.