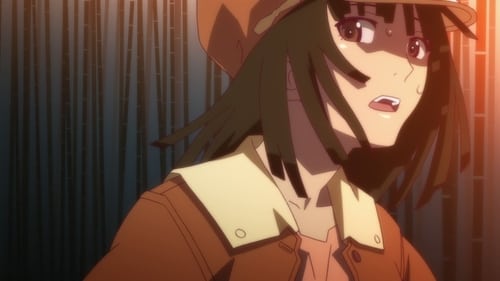 Koyomi and Suruga travel to an abandoned shrine in order to perform a favor for Oshino. As they climb the mountain the shrine is located on, they pass a girl running down the path, who only briefly exchanges glances before continuing in the other direction. Once they reach the shrine, Koyomi and Suruga discover a number of dismembered snake corpses in what appears to be some sort of ritual. They both quickly decide to leave. Later, Koyomi comes across Hanekawa in a bookstore, where they begin to converse. Hanekawa warns Koyomi that he and Hitagi must set down boundaries in their relationship if it is to last. She then leaves after getting a sudden headache. Koyomi then meets the girl again, who he finally realizes is Nadeko Sengoku, a friend of his sisters who he met as a child. He and Suruga intercept her at the shrine, and return to Koyomi's house. Once there, Nadeko takes off her clothes, revealing snakelike skin, and pleads for Koyomi to save her.