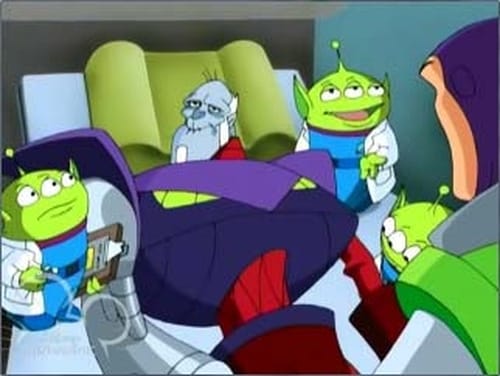 While on an archeological expedition, studying ""Planet X"", the LGMs stumble upon the quasi-Egyptian resting place of an ancient powerful being called ""Natron the 1st"" (...who is also known as ""Natron the Destroyer"" and lots of other ""Natron the [REALLY NASTY THING]"" names...). Zurg has sent Warp Darkmatter to scope out the LGM's findings, meanwhile. When Natron awakens, he freezes the LGMs in some sort of stasis field, and drains Warp's life-force in order to soup himself up to a state closer to his former glory. This results in Warp aging into a wizened old man. Natron rants on a bit about how he had been laid low thousands of years ago by someone known as ""The Protector"" (...of whom we find out absolutely nothing...), and sets off to take over Capital Planet. Warp and Team Lightyear set out to stop Natron; Warp is helping Team Lightyear since the only way that he can regain his proper age is if Natron is defeated. They manage to reverse the process that Natron used to drain the