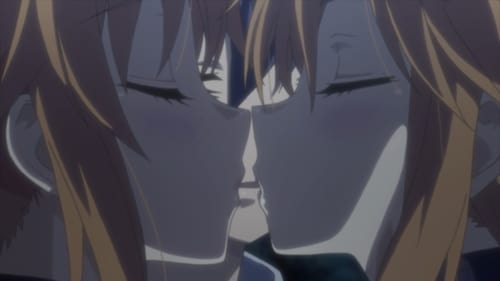 The woman stalking Tohka and Shido before, Ellen, finally reveals her true colors and orders a pack of mechs called Bandersnatch units after Tohka in an attempt to capture her. During the clash, Tohka gets incapacitated and captured only for Shido to call upon her sword to break the Bandersnatch off her. Meanwhile, Kannazuki and his crew on board the Fraxinus gets attacked by an enemy airship. Kannazuki launches a counterattack after deflecting several shots, leading to a full-scale dogfight between the two ships. Back at Shido's battle, Ellen falls down into a pit trap (oddly enough) dug by Ai, Mai, and Mii allowing Shido and Tohka to escape. Running to Kaguya and Yuzuru, he summons Tohka's power to intervene the duel and convinces both the girls to forget about becoming Yamai and focus on enjoying their lives together. Noticing the airship that attacked the Fraxinus, the twins combine their powers and eviscerate the ship with one massive blast. After the incident, Shido successfully seals the Yamai twins' powers, unfortunately stripping them of their clothes just as Tohka arrives. Meanwhile, Kotori learns from a strange man that Shido has manifested a spirit's power and that she might have to kill Shido if the situation worsens.