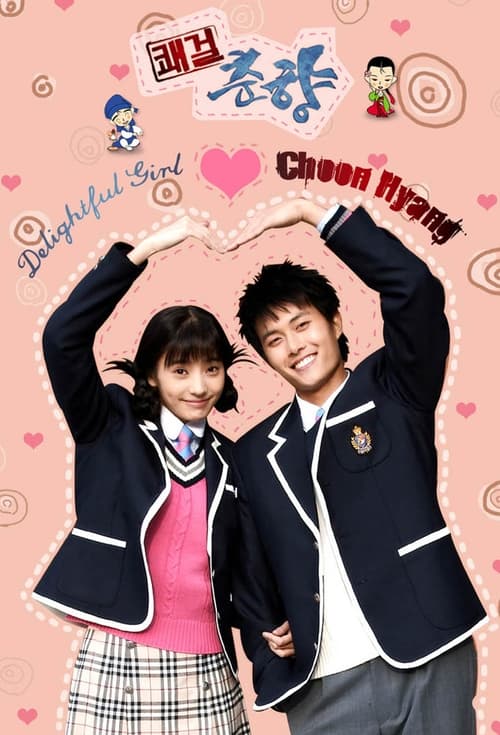 Delightful Girl Choon-Hyang is a 2005 South Korean television series starring Han Chae-young, Jae Hee, Uhm Tae-woong and Park Si-eun. It aired on KBS2 from January 3 to March 1, 2005 on Mondays and Tuesdays at 21:55 for 17 episodes. A modern retelling of the classic Korean folktale Chunhyangjeon, the romantic comedy series was called "fusion-style" for, among others, mixing rap with pansori in the background music. This is the first Korean drama written by Hong Jung-eun and Hong Mi-ran, and remains the highest-rated in their filmography, with a peak viewership rating of 32.2%. The story begins when Lee Mong-ryong is transferred from Seoul to a high school in Namwon, North Jeolla Province. Chun-hyang does her best to help Mong-ryong, her first love and the son of the Namwon Police Station chief, to enter a prestigious university. However, after meeting with Mong-ryong’s first love, Chae-rin, Mong-ryong’s love toward Chun-hyang is shattered, although Chun-hyang’s love remains unwavering. One day, Byeon Hak-do, CEO of a famous entertainment company, appears in her life. He exudes confidence that he can make any woman fall for him. But as Chun-hyang shows no interest in him, his self-esteem is damaged profoundly. Byeon Hak-do is determined to make her love him.