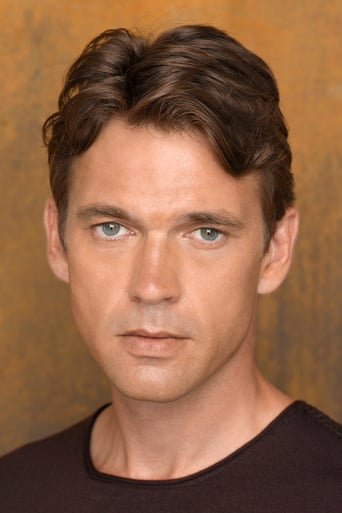 Stephen Dougray Scott (born November 25, 1965) is a Scottish actor. He's married to actress Claire Forlani and they have 2 daughters. His notable film roles are as Eric Vennekor in Deep Impact (1998), Prince Henry in Ever After (1998), Sean Ambrose in Mission: Impossible 2 (2000), Tom Jericho in Enigma (2001), Kyle Williams in Dark Water (2005), Hitman (2007), Arthur Miller in My Week with Marilyn (2011), and Stuart St. John in Taken 3 (2014). His notable TV roles include DI Ray Lennox on Crime, Jacob Kane on Batwoman, Sir Percival Glyde on The Woman in White, Vic Hill on the series Snatch, Norman Godfrey on Hemlock Grove, Ian Hainsworth on Desperate Housewives, and Alex in Stay Lucky. His early work was in Scottish national theatre, television and puppet shows, first appearing in the series Soldier Soldier as well as on the stage in the Tim Fleming directed production of Wallace. Early television credits to follow include The Rover, Taggart: Nest of Vipers, Lovejoy, and Soldier Soldier. His first major film roles were as Prince Henry in Ever After and the hero in the film adaptation of the Robert Harris novel Enigma. He played the villain in Mission: Impossible 2 (and was selected to do so by Tom Cruise). He was going to play Wolverine in the feature film version of X-Men. When Mission: Impossible 2 went over schedule and he was injured in a motorbike accident while shooting the chase scene, he was forced to drop out of the project and was replaced by Hugh Jackman in X-Men. After the 2002 release of Die Another Day, he was a candidate to replace Pierce Brosnan as James Bond. Despite the numerous reports that Eon Productions was leaning towards naming him as the new Bond in the 007 adventure Casino Royale, the role eventually went to Daniel Craig. He starred opposite Jennifer Connelly in Dark Water (2005) and Hit Man (2007), The latter which was based on the Hitman video games. In January 2006, he played Moses in the miniseries The Ten Commandments. He appeared in the NBC series Heist. From 2006 until 2007, he starred in the third season of Desperate Housewives as Teri Hatcher's character's new love interest. In 2007, he played the primary antagonist in the film Hitman, . He appeared in the title role(s) of a modern re-telling of Dr Jekyll and Mr Hyde. He starred in The Day of the Triffids, which was broadcast in December 2009 as part of the BBC 1 Christmas schedule. In 2011, Scott featured in the film Love's Kitchen alongside his wife, actress Claire Forlani. In April 2011, he portrayed football manager Matt Busby in the BBC TV drama United, which was centered on the Munich air disaster of 1958. In 2014, he portrayed the main villain in Taken 3. In March 2016, he became the voice of Orby in adverts for the oil and gas company BP. In April 2016, he appeared in the second season of Fear the Walking Dead as Thomas Abigail, Victor Strand's business partner and lover. In 2019, he joined the CW series Batwoman as Jacob Kane, the title character's father, set in the Arrowverse.