The person I met at the rose gates 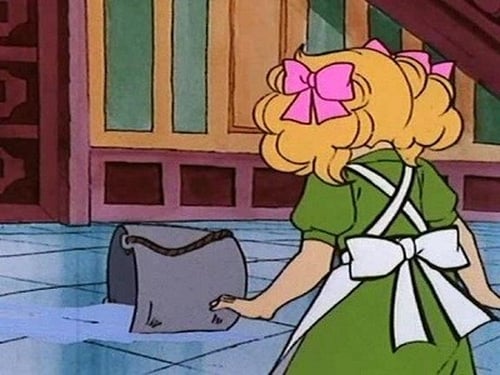 Down in the kitchen where Candy immediately feels at home, the servants praise Candy for her efforts to stand up against Eliza and Neil. Despite the servants' protests, she volunteers to help out with chores. When the cat Sylvia messes up Candy's cleaning of the hallway, Klint gets into a fight with her. He manages to corner the cat, but not without creating a mess. Mrs. Leagan reminds Candy that she is to be Eliza's playmate and banishes Klint. Candy attempts to leave him in the forest and binds him to a tree to keep him from following her, but cannot find it in her heart to leave him. Instead, Candy hides Klint in the barn. But she throws all caution in the wind after receiving a letter from Pony's Home and runs to the barn to share the letter. Dressed to ride, Neil and Eliza witness Klint following Candy out of the stables. They pester her to the brink of tears, first by taking away her letters, then her prince's pendant after she dropped as she reached for the letter. They blackmail her into choosing between the pendant or Klint. Candy is able to retrieve the pendant from Neil before running off, her course set for Pony's Home . . . if not for seeing her prince in a red coat appearing at some grand rose gates. Like on the hilltop, he disappears seemingly into thin air once she's laughing and smiling again, paying her the same compliment as before. When Candy takes a closer look at the gates, she notices the same crest as her pendant: that of the Ardley family. Neil and Eliza's expect "cry-baby" Candy is already on her way to Pony's Home, when Candy skips happily singing back into the Leagan home, pitying Neil and Eliza for their ill feelings.