The Worst Reunion by Chance 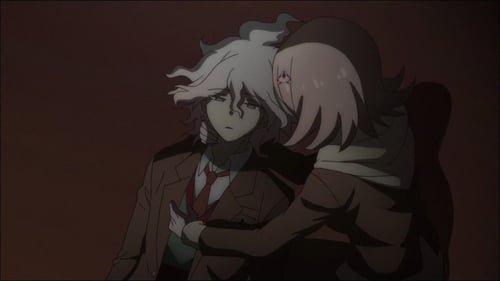 After noticing that Mikan has been acting strangely around Junko, Ryota is shocked to discover a video of the student council's killing game. Junko reveals that she plans to combine this video with Ryota's anime to create something that will brainwash people and send them into despair, threatening to subject his classmates to another killing game should he refuse to cooperate. Meanwhile, as Kyosuke arrives to help deal with the Reserve Course riots, Nagito, who has returned from his long absence, mentions that he has seen Mikan on the school grounds, prompting the rest of the class to go off in search for her. During their search, Nagito leads Chiaki to the secret room where Junko and Ryota are, having swordswoman Peko Pekoyama hold off Mukuro. Nagito attempts to shoot Junko but is stopped by Izuru, who Chiaki recognises as Hajime, while Ryota escapes and runs into Chisa, who rushes towards the scene.